Turmeric is all the rage right now, and rightly so. It is a healing spice that has been used in East Indian cooking, and traditional medicine, for many centuries. The people of India have long known the power of this golden orange spice.

The power of turmeric is contained mainly in the spice’s high concentration of a substance called “curcumin.” It appears that one of curcumin’s superpowers is that acts as an anti-inflammatory in the body: research is emerging which shows that curcumin may interact with certain proteins and enzymes in the body towards the regulation of inflammation, a consequence of invading bacteria. It is also suggested that curcumin supports the body’s healing process by strengthening the immune system. For these reasons, and many other suggested benefits, curcumin and turmeric are now being investigate as possible tools in the fight against cancer, Alzheimer’s Disease, allergies and chronic disease states.

Turmeric, often used in powdered form, gives the deep yellow hue to Indian curries. Turmeric root is also the main ingredient in a popular Indian drink called Haldi Ka Doodh, or Turmeric Milk. A staple cure-all used for centuries, often to fight the common cold. People who swear by Turmeric Milk suggest it helps to lesson chest congestion, cough and a sore throat. Give it a try! We have rounded up a few recipes that offer a variety of ways to brew your own cup of Golden Milk – some contain ginger, others cardamom. We recommend using coconut milk, rather than cow’s milk. Dairy can prove mucus forming for many individuals. 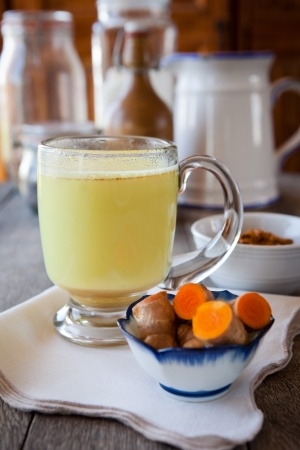 Do you have another way to enjoy turmeric? Will you try this this cold and flu season?

Hi, I’m Dr. Maureen. I love being a joy catalyst for people: to help them feel fantastic, do good in this world, and love more openly. I want you to dance more, laugh more, and live a life filled with energy, clarity, and joy.